Terrano 3.5 FX is excellent mixing in all conditions - Cultivation Machinery

The HORSCH cultivator Terrano MT has been specially designed for the following range of use: “mixing on the top, loosening at the bottom”. The cultivator has a middle chassis and a 4-bar frame design (2 rows of discs + 2 rows of tines). It is particularly suitable for cultivating heavy soils that have to be loosened deeply, but where harvest residues can only be mixed in in a shallow way to prevent rough soil from being transported to the surface.
The 2-row DiscSystem allows for a shallow and intensively mixing cultivation and a clogging-free working even if there are difficult residues and high quantities of straw. The DiscSystem creates a lot of fine earth and the working depth can be adjusted hydraulically and steplessly.
The DiscSystem is followed by a 2-bar tine system. Due to the large tine spacing of 40 cm and the narrow (40 mm) LD (low disturbance) points the power demand for this system is relatively low.
A disc harrow is located in the first two rows of the Terrano MT followed by two rows of TerraGrip tines with narrow LD (low disturbance) coulters. For maximum consolidation it is equipped with the HORSCH SteelDisc packer .
It allows for an intensive loosening down to a depth of 30 cm with a low mixing effect. Almost no rough soil is transported to the surface and it runs below the disc harrow horizon. The new Ultra LD points increase drainage as they cultivate the soil but do not bring large clods to the surface.
Due to its middle chassis the Terrano MT is extremely manoeuvrable on the headlands and its roadability is excellent. Under for example wet conditions the chassis can be used additionally for depth control. Thus, less weight ist transferred to the packer – the HORSCH SteelDisc packer with a diameter of 58 cm and a weight of 175 kg/m working width for maximum consolidation. It is also ideal on most heavy soils and its packer elements leave a good soil structure. Additionally, the Terrano MT is equipped with two efficient double rollers. You can choose between a double RollFlex or a RollPack packer . 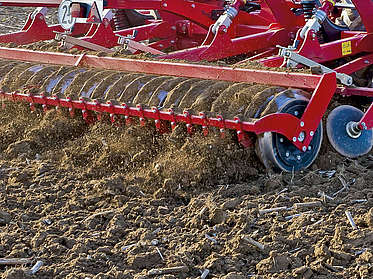 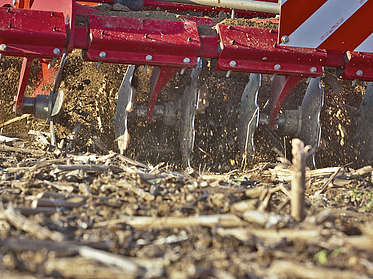 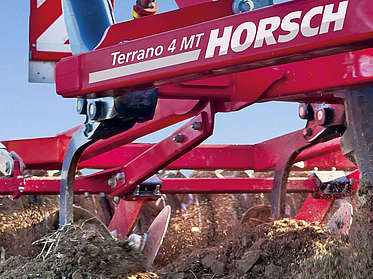 TerraGrip tines with LD points for deep loosening of the soil

What are the excelling features of the Terrano MT?

The Terrano MT is the ideal machine for heavy soils that have to be loosened deeply, but where harvest residues should only be mixed in shallowly to avoid that rough soil is transported to the surface.

HORSCH Milestone – Farming without a plough

During the 30-year-old company tradition HORSCH – like no other manufacturer – contributed to the breakthrough of tillage without a plough . In 2013, these efforts were awarded with the “ Milestone of Agricultural Engineering ” award. A lot of products, e. g. the Terrano, Tiger and Joker models and last but not least the universal seed drill Pronto DC, allow for farming without a plough on the highest level. According to the Federal Statistical Office by now 40 per cent of the arable land is cultivated without a plough. For wheat it amounts to even 60 per cent. 20 years ago no-one dared to believe that. HORSCH played an important part in getting this far. With this background other milestones in agricultural engineering will be developed. 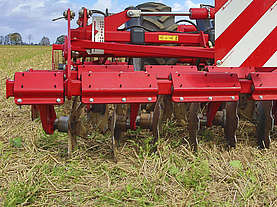 Hydraulic depth limitation of the chassis for working without a packer 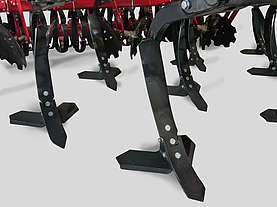 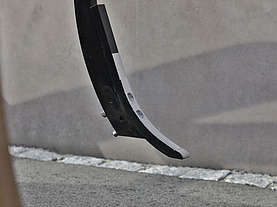 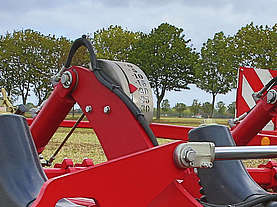 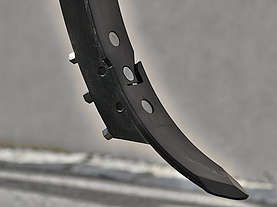 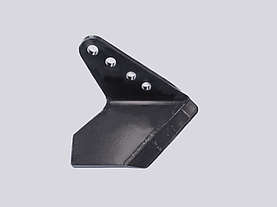 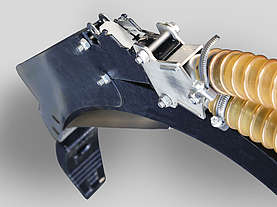 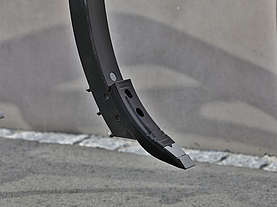 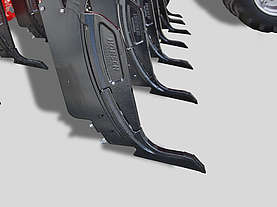 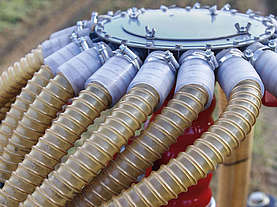 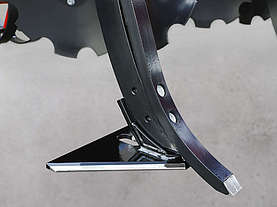 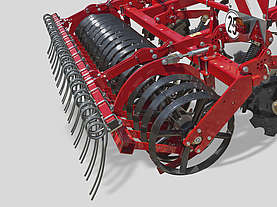 Optional: harrow behind the packer

The TerraGrip is a very powerful tine with overload protection. The trip height amounts to 30 cm without triggering a shear bolt. This saves time and money. Due to the effective stone protection the tine moves quickly in case of overload and due to the spring force penetrates the soil again quickly and exactly – without the usual side movements.
When avoiding an obstacle, the force of the spring decreases from 500 kg to 175 kg. The force that acts on the frame is thus reduced considerably. The optimised spring kit allows for an exact point control in the desired working depth – even in heavy soils and large working depths. Due to high-quality material and large pivot points any greasing points become unnecessary.

TerraGrip II 500 kg release force / 30 cm trip height.
When releasing the force decreases to 170 kg. This releases the stress on the frame. 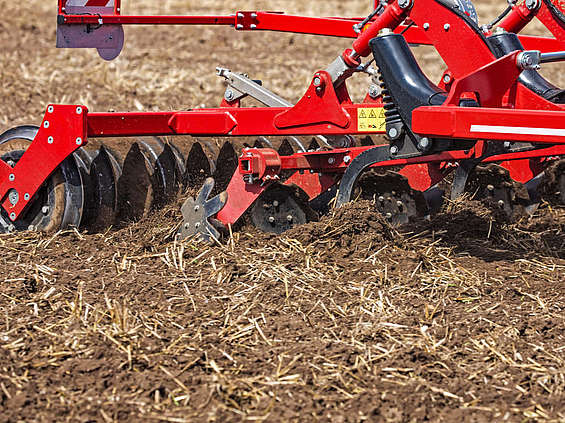 
POINT VERSIONS FOR ANY USE

The MulchMix point with its steep angle is designed for the intensive mixing of harvest residues and deep cultivation. Due to the large diameter (600 mm) of the HORSCH MulchMix point the soil is not pressed and its structure remains intact. Regardless of the working depth: The point never penetrates the soil vertically. This reduces the horse power requirement and saves valuable petrol. Even if there are high amounts of straw, it achieves an excellent mixing quality. The MulchMix points consist of three parts (point, guide plate, wing) which can be changed independently. For a very shallow stubble cultivation and all-over cutting the wings can be set to a shallow position. If deep loosening and at the same time an excellent mixing of the soil is desired, the wings can simply be dismantled. 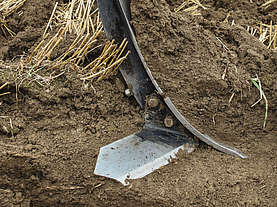 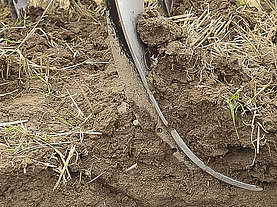 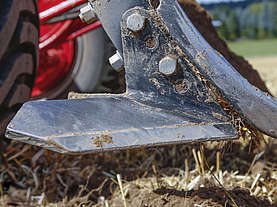 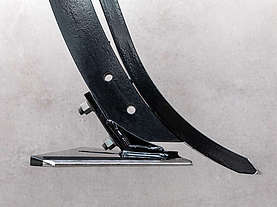 The newly developed HORSCH TerraCut wing is used for shallow, all-over tillage at a depth of max. 8 cm. The 40 cm wide wing point is combined with the well-proven LD or LD+ point and can be used on all HORSCH TerraGrip tines. The shallow setting angle of the TerraCut point guarantees a safe cutting effect and a low mixing effect for an efficient drying-out of growth or catch crops. If a deep loosening is sufficient and mixing is not required, HORSCH LD coulters that loosen excellently up to 15 cm below the surface and do not move much earth can be mounted.


FOR THE OPTIMUM RESULT

HORSCH can supply the appropriate packer version for deep as well as for shallow consolidation. The choice of the packer depends on the soil and HORSCH has a reasonable solution for any type of soil. Due to the consolidation excessively loose soil is compacted, clods are destroyed and an ideal environment with an optimum ratio of water- and air-bearing pores is created.
In addition to the SteelDisc packer with a ring spacing of 150 mm, another SteelDisc packer with a ring spacing of 200 mm is available for more flexibility in consolidation. The packer range is completed by two double packers: the double RollFlex packer and the double RollPack packer . 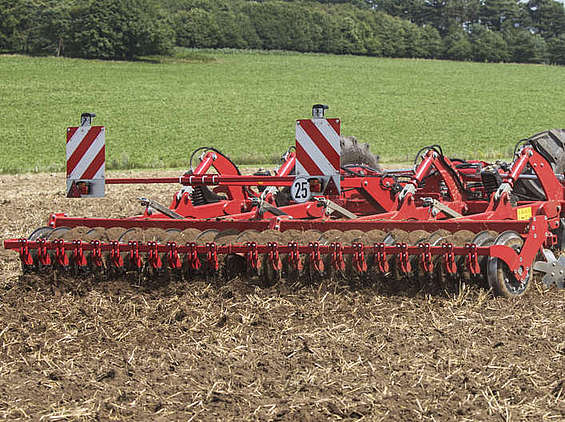 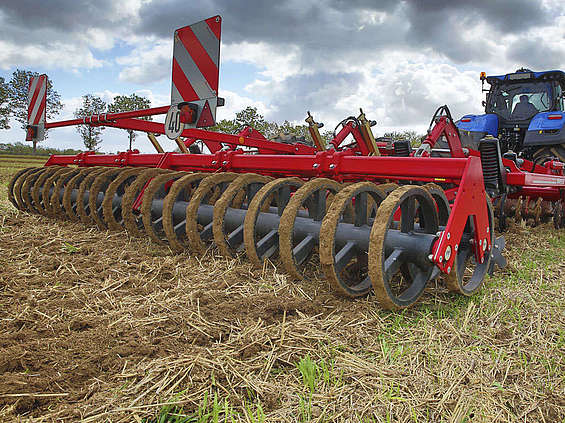 The depth effects and the primary use of the different HORSCH packer versions .

Why is the appropriate packer so important for your machine? 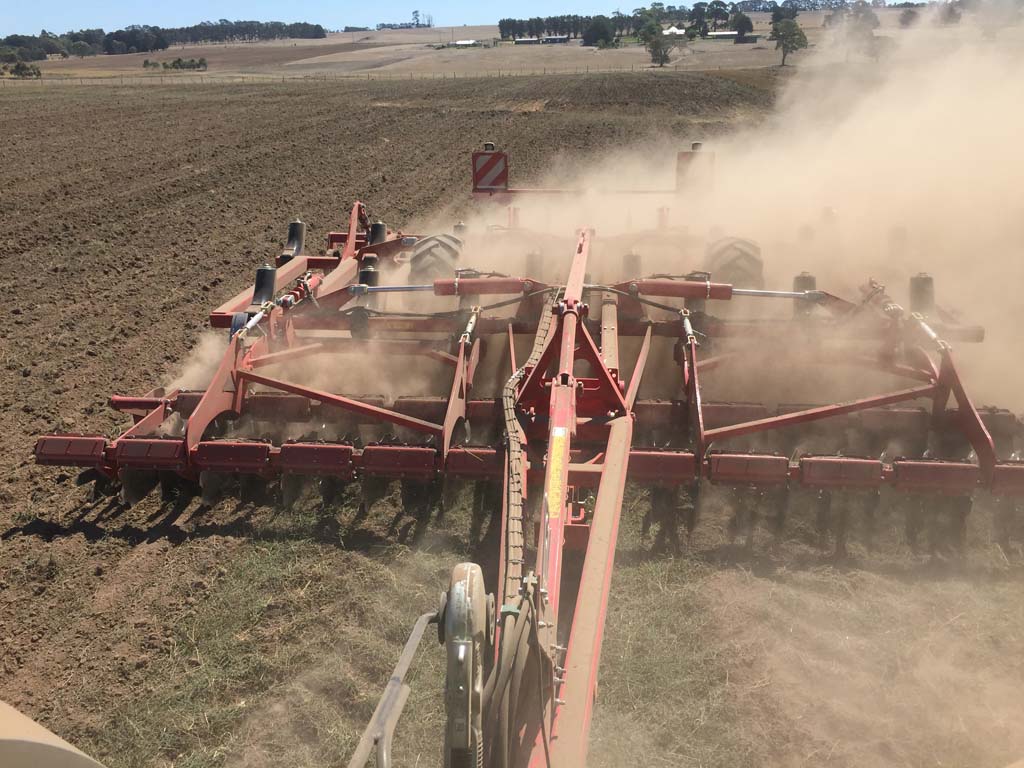 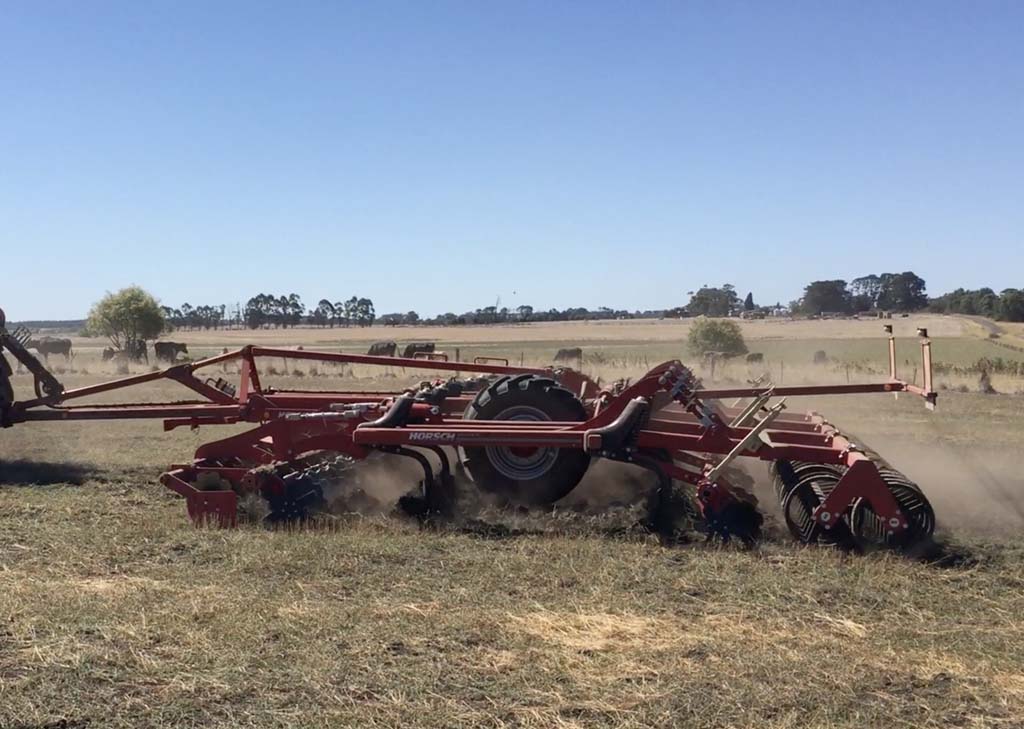 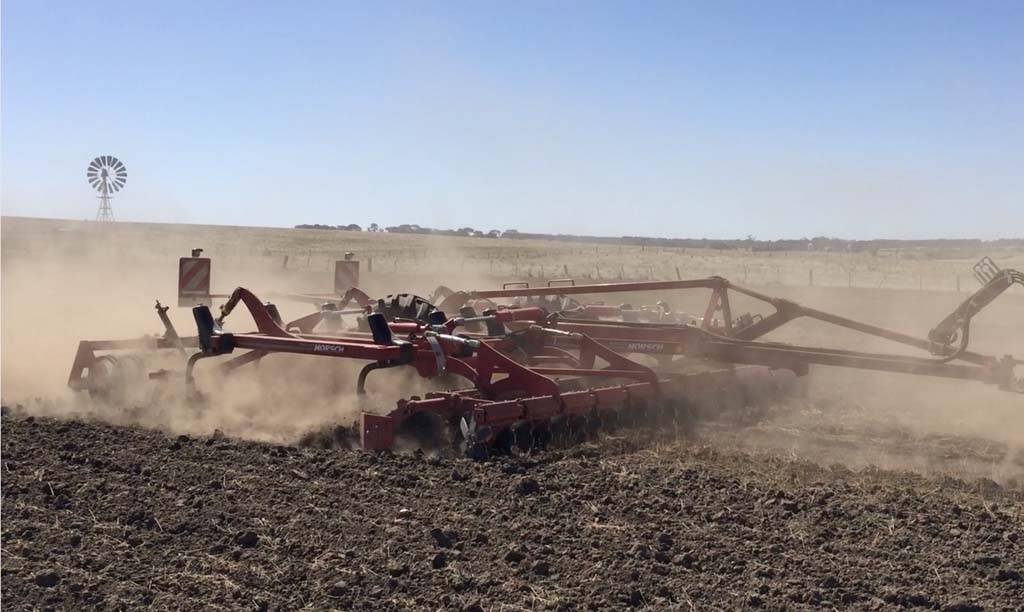 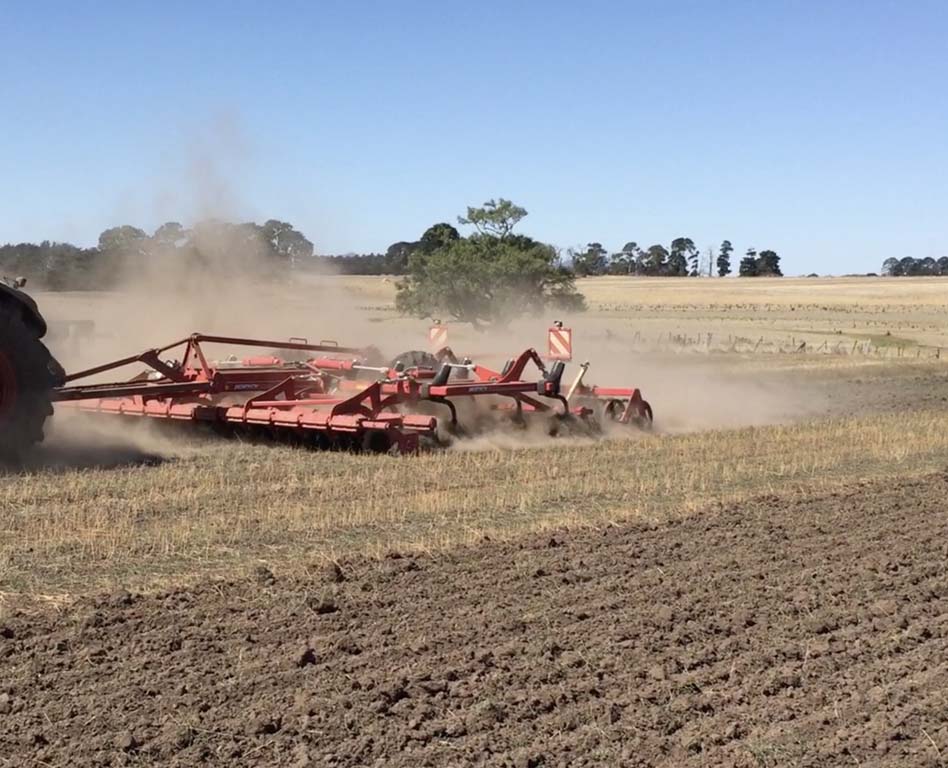 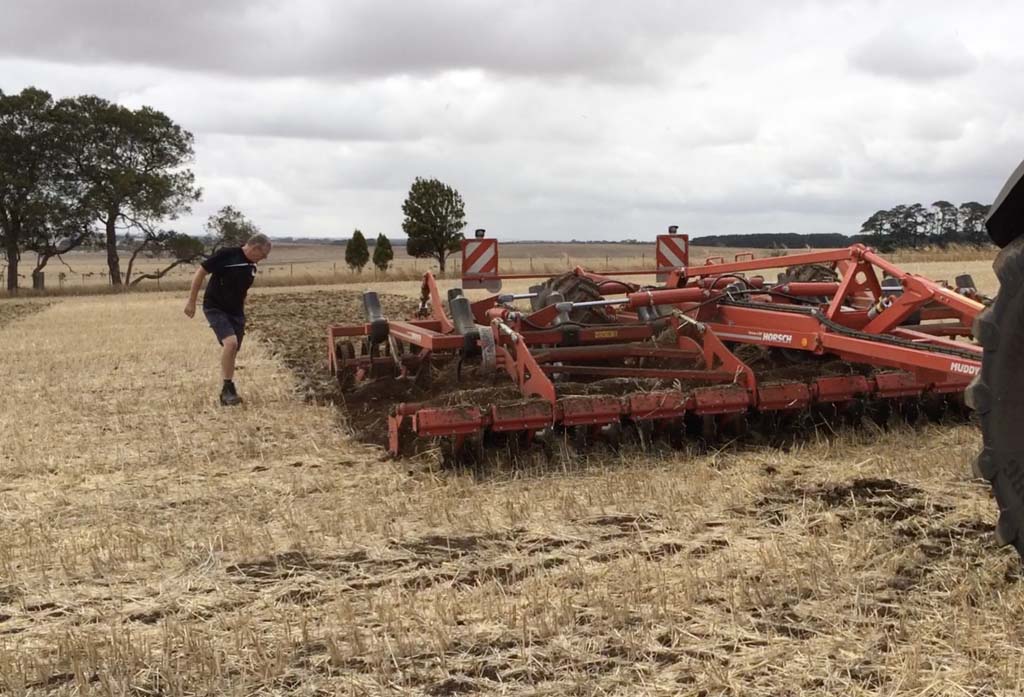 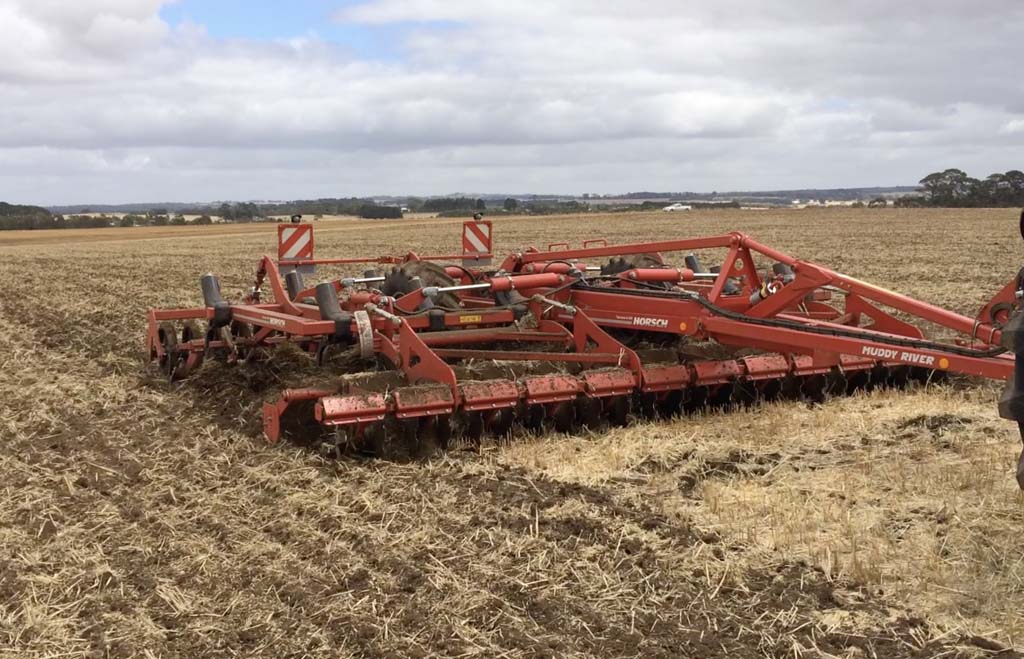 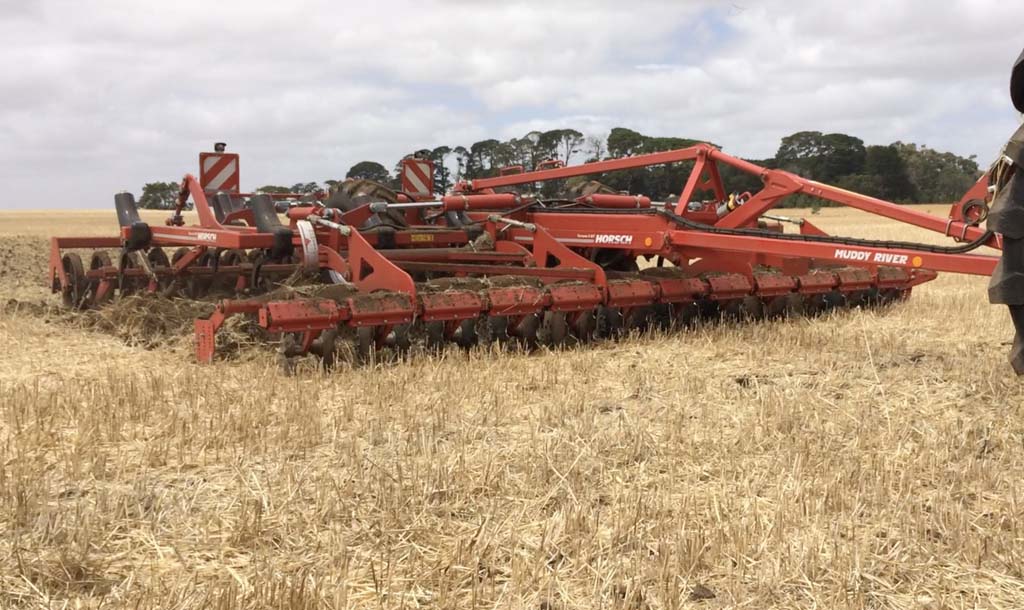 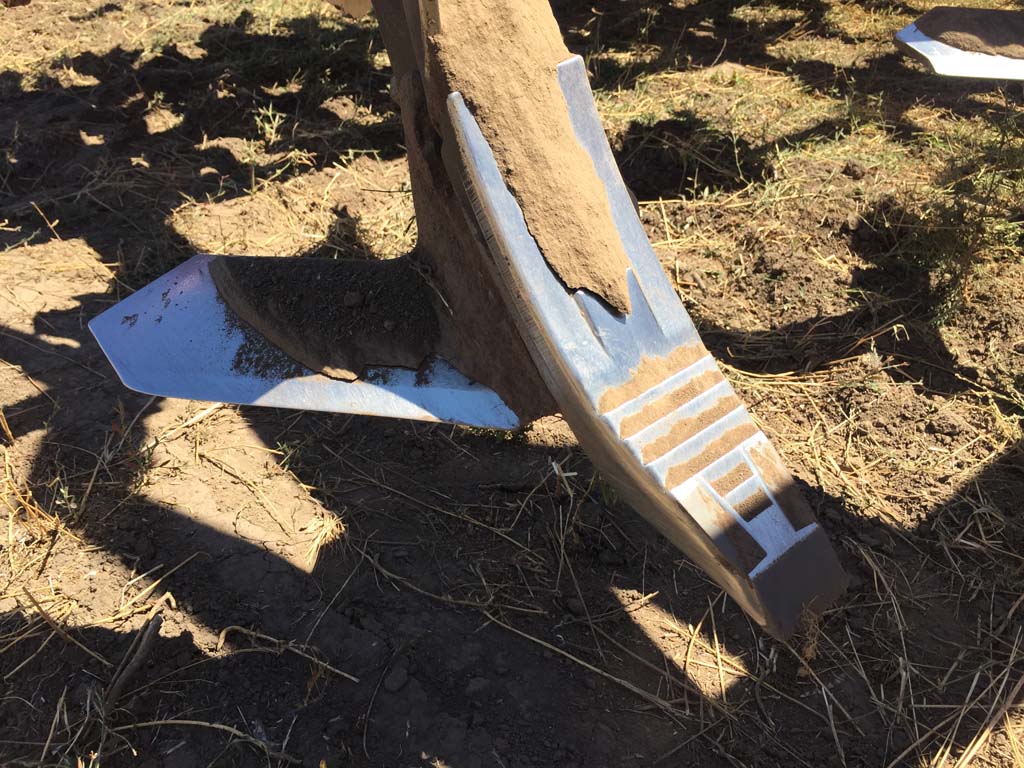