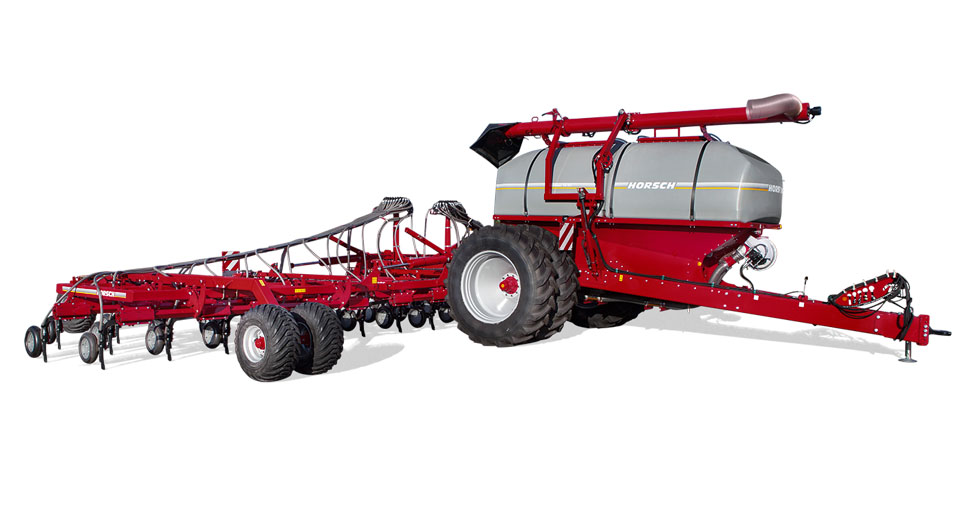 - Total shanks controlled by several cylinders instead of one per shank. Less hosing, plumbing, and
margin of error for serviceability in the future.
- There are no bushings, shims, or other wear points on the shanks. All are mounted with durable
rubber torsion.
- Easy depth adjustment on shanks and coulters
- Instantaneous terrain response for the opener/shank due to the rubber torsion system.
- Fewest wear points of any seeding bar available today
- Coulters controlled with several cylinders also on a rubber torsion arm. No wear points other
than the blade itself. Easy adjustment.
- Active adjustable wing down pressure set from monitor
- Large flotation tyres on 3 metre spacings, steerable hitch and front axle,
means it runs on the tram lines at all times on both centre section and wings
- Either the 12,000ltr, 17,000ltr or 21,000ltr cart can be used, tow between or tow behind
- Simple high capacity air system, two 5.5“ tubes, smooth transition with accurate distribution 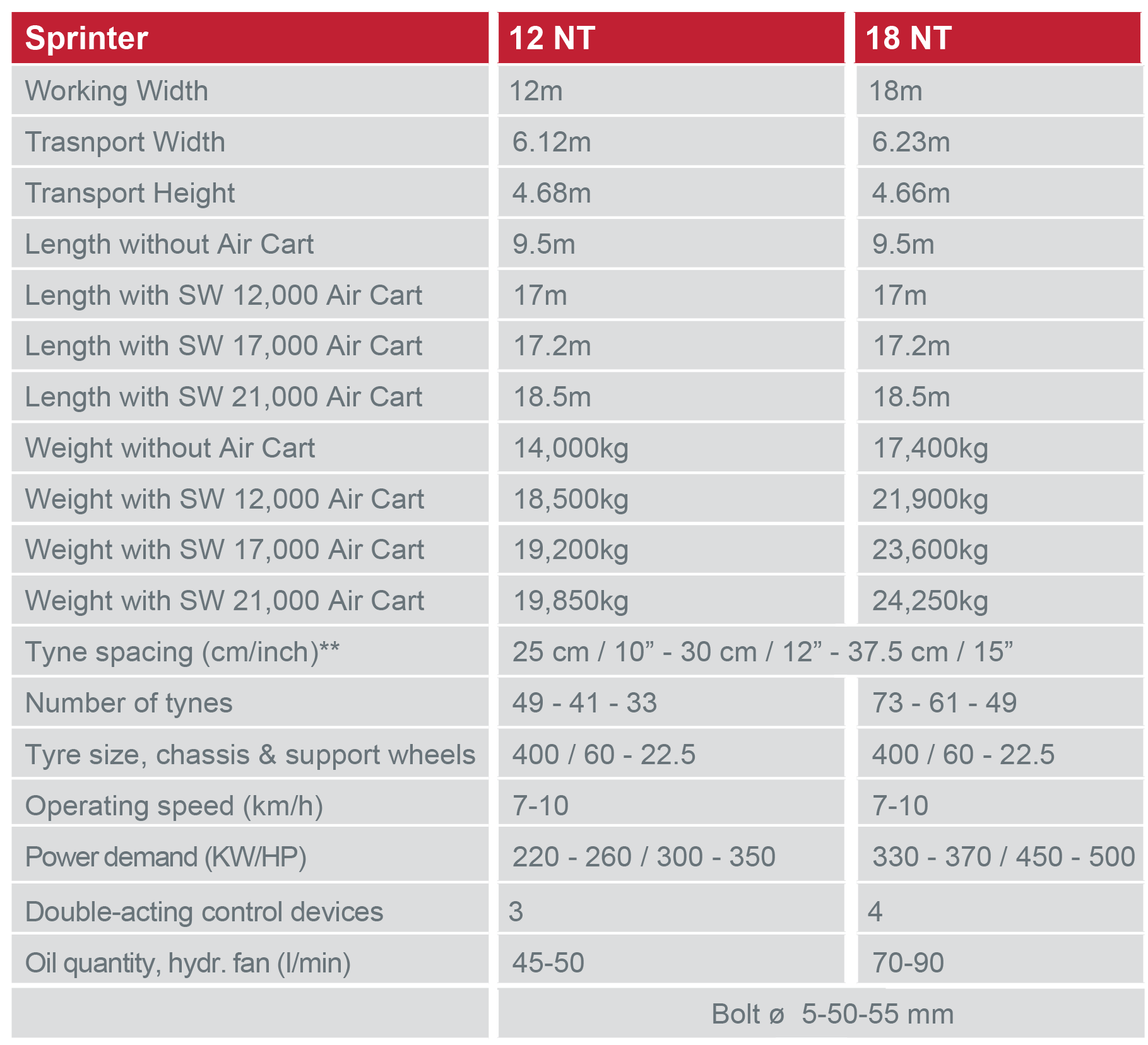 The Sprinter is a robust, compact and multifunctional
tyne seed drill available in working widths from 12 to 18m.

Due to the coulter it is possible to sow, fertilise and at the
same time cultivate the soil effectively as well as produce
fine soil in the area where the seed is placed – all in one pass.

The Sprinter tynes effectively remove harvest residues from
the seed horizon. With a large-capacity air cart the
Sprinter is a high hectare output machine.

They prepare the seedbed in an optimal way. as with a
cultivator tyne the soil is loosened, levelled, mixed and packed.
The Sprinter NT with 12 and 18 metre working width stands
for maximum efficiency.

The HORSCH NT tyne technology allows
for a fine earth in the seed row and for the
placement of the seed in a so-called “gentle furrow“.

The tyne forms a furrow and removes lumps and
organic material from the seed zone. The seed is placed
into this furrow and firmed in the wet soil by the press wheel.

Thus, very good emergence is achieved even under extreme
climatic conditions. Sowing is possible into cultivated as well
as into uncultivated soil. 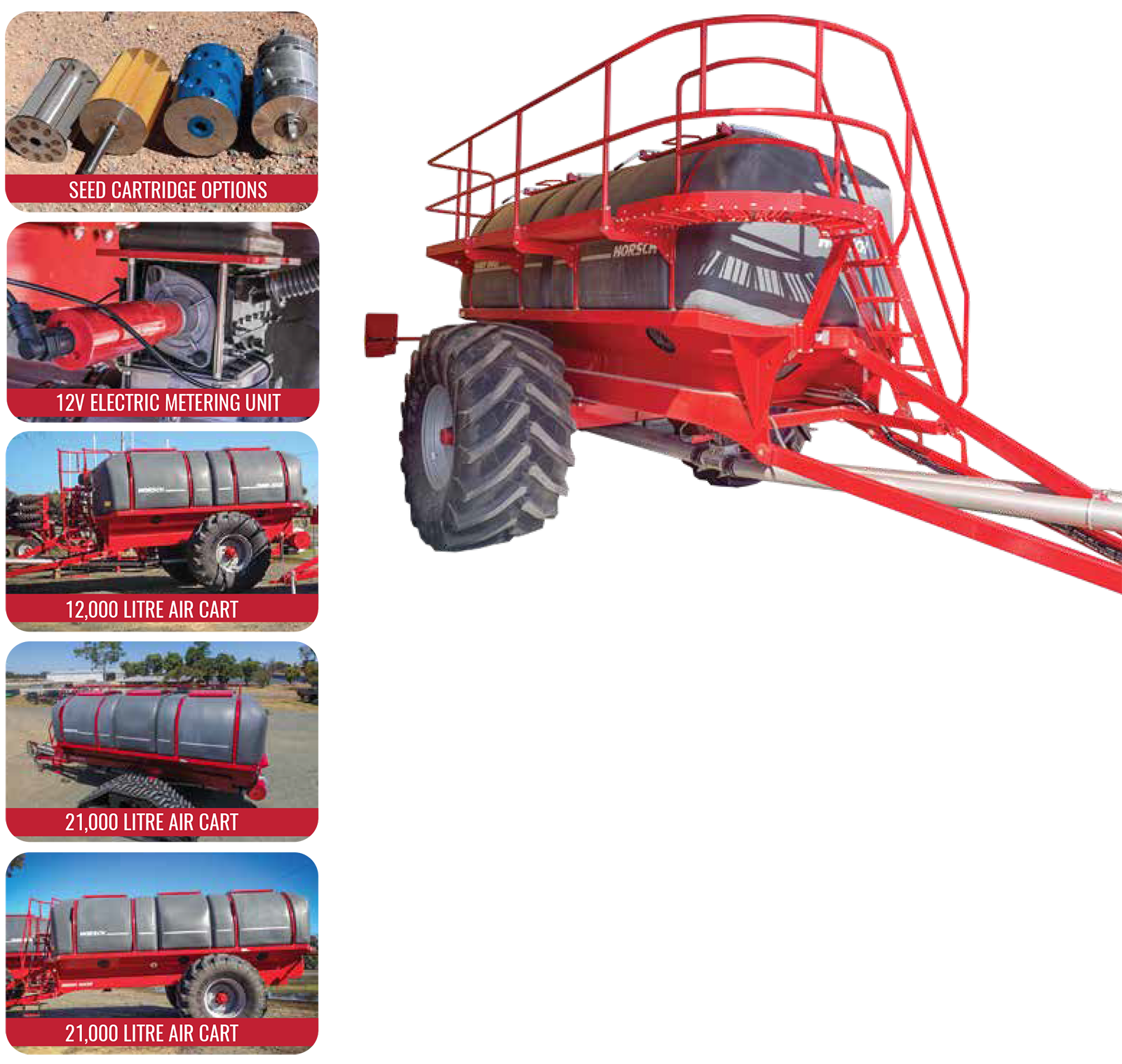